RFID security certification based on TH-PPM

0 Introduction In recent years, many RFID security authentication algorithms and protocols (such as Hash-Lock protocol, packet encryption algorithm) solve the security authentication of RFID systems at the protocol layer and algorithm layer, and these methods all assume between the tag and the reader The communication has been eavesdropped to achieve the protection of information. Digital encryption algorithm will inevitably increase the complexity of the tag circuit and thus increase the power consumption of the tag. Research shows that the AES algorithm composed of 3 595 NAND gates requires 8.5 Î¼A current to drive, even if the power consumption and cost of the encryption algorithm are reduced, the encryption algorithm The delay can not be ignored, because the encryption algorithm requires multiple cycle counts, and works under a low-frequency clock, so that most of the communication between the tag and the reader is wasted on implementing encryption. Research has proved that it takes about 995 cycles to implement an AES algorithm. Assuming that the clock of the tag is 1 MHz, it takes about 1 Î¼s to complete AES encryption, while the Gen-2 standard tag has only 1.6 Î¼s to transmit 128-bit information. Visible encryption The delay of the algorithm is considerable.
In order to solve the shortcomings of digital encryption, people have proposed a variety of lightweight security certifications (such as HB, HB +, HB ++ protocols) in an attempt to reduce the cost and power consumption of tags. In the HB protocol, the tag and the reader share a key x. The flow of the HB protocol is: a random challenge value a generated by the reader and sent to the tag; the tag passes a series of calculations according to the values â€‹â€‹of a and x. The result is sent to the reader; the reader checks whether the result meets the specifications; if the reader fails to verify the result sent by the tag within the specified number of times, the tag passes the verification. Although the HB protocol simplifies the circuit structure, it cannot resist active attacks. If the attacker pretends to be a reader and sends a modified random challenge value a to the label n times, the value of x can be guessed.
Due to the shortcomings of the HB protocol, many scholars have produced HB + protocol and HB ++ protocol for their improvement, and also produced some new protocols (such as Hash-Lock and Hash chain protocol), but they are all based on Hash operation module or block encryption algorithm. It does not reduce the cost and power consumption of label safety certification.
Due to the above defects of the encryption algorithm, UWB-based RFID security authentication is proposed. This authentication is to protect the data of the RFID system on the physical layer of communication and adopts TH-PPM modulation. Each tag of the TH-PPM modulation and demodulation system uses its own specific time-hopping code, and only a receiver that knows the time-hopping code can demodulate the signal. The advantages of UWB-based RFID security certification are:
(1) The power of the UWB signal is close to the noise power of the channel, and it is difficult to be eavesdropped;
(2) UWB signals do not need to be encrypted, because each tag has a different time-hopping code, and the time-hopping code is absolutely confidential;
(3) Because the UWB-based RFID security authentication system does not have the delay of the encryption algorithm, the communication delay is shorter; the UWB signal has better anti-interference performance than the narrowband signal, it is not easy to block and eavesdrop, and frequency reuse can be achieved.

UWB system has a variety of pulse modulation methods (TH-PPM, DS-PAM, etc.), because TH-PPM circuit is simple, low cost and low power consumption, so it can be used for the modulation method of UWB RFID system. PPM modulation uses the deviation of the position where the pulse appears from the standard position to represent a specific symbol. TH-PPM is a combination of time hopping and pulse position modulation. First, the PN code is used to select the time slot of the transmission symbol (the time hopping of a PN code with a period of 2N-1, due to the pseudo-random generator within one cycle of the PN code There are 2N-1 states, so it takes 2N-1 time slots to transmit a symbol); then use the symbol to control the pulse's offset from the standard position in the selected time slot in PPM modulation, the TH-PPM signal is :

For example, for a binary source, when hopping with a PN code with a period of 2N-1, first select the time slot for transmission of the PN code according to the state cj of the PN code generator, that is, shift ciTc in the bit space; then, when selecting In the slot, when the symbol is "0", the position of the pulse does not shift. When the symbol is "1", the position of the pulse in the time slot is shifted by ai â–³, and the total offset of the pulse in the bit space is ciTc + ai â–³, request ai â–³ "ciTc (when ci â‰  0).
1.2 TH-PPM RFID data frame structure The data frame format of TH-PPM RFID is shown in Figure 1. The bottom layer of the figure is a time slot in the bit space where the transmission symbol is randomly selected. From the above analysis, there can only be one bit space There are only pulses in the time slot, and different offsets in a time slot represent different symbols. It can be seen from the figure that the entire data frame has a total of 176 b and is divided into three parts: the header, the initial state of the PN sequence, and the tag ID. The header consists of 32 b, which is used for the synchronization of tags and readers. The initial state and tag ID of the PN sequence are composed of 16 b and 128 b, respectively. The initial state of the PN sequence is transmitted to the reader to achieve pseudo-random code synchronization. If the PN code is not synchronized, the reader cannot despread the signal and cannot obtain label information, so synchronization is the key to TH-PPM. 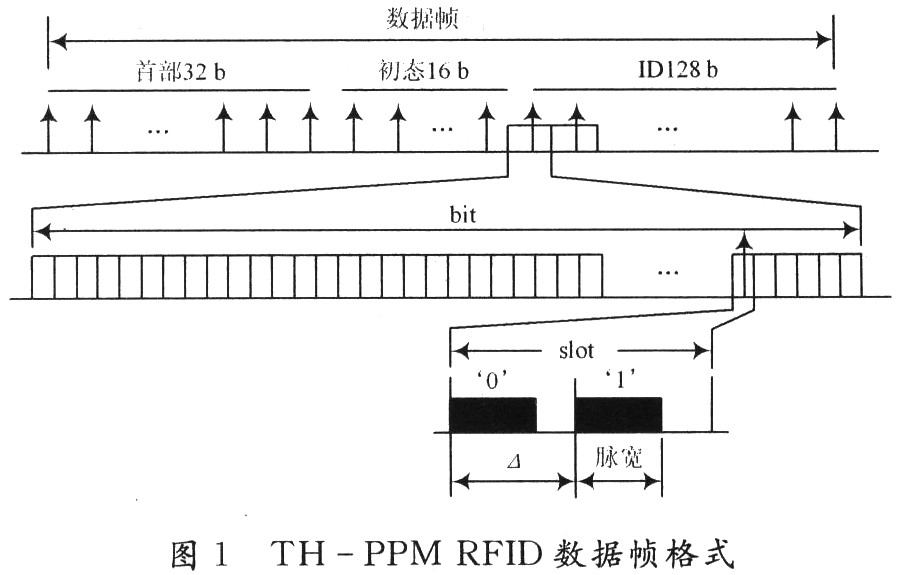 1.3 The structure of TH-PPM RFID tag display The structure of UWB RFID tag is shown in Figure 2, which is mainly composed of energy conversion supply circuit, PN code generator, PPM and pulse shaping and other modules. When the energy conversion circuit of the tag receives the signal, it converts part of the energy into the energy required by the tag, and the other part is processed by the narrowband receiver to provide the clock for the tag; if the tag has enough energy, it is based on the anti-collision algorithm Add discussion) Prepare the data to be sent. At this time, the 176 b data in the data frame of the tag is integrated to form a binary data stream, and the repeat encoder is input at a rate of Rb = 1 / Tb; Repeat the Ns encoding to increase the data stream rate to Rcd = Ns / Tb = 1 / Ts (Ts is the bit space for transmitting a symbol) to realize the channel coding of the data; then realize each pulse by time-hopping and PPM module In the positioning of the bit space and time slot, a pulse frame filter with a Gaussian multi-order differential impulse response is sent to the reader. The following mainly introduces the PN code generator and PPM modulation module in the system. 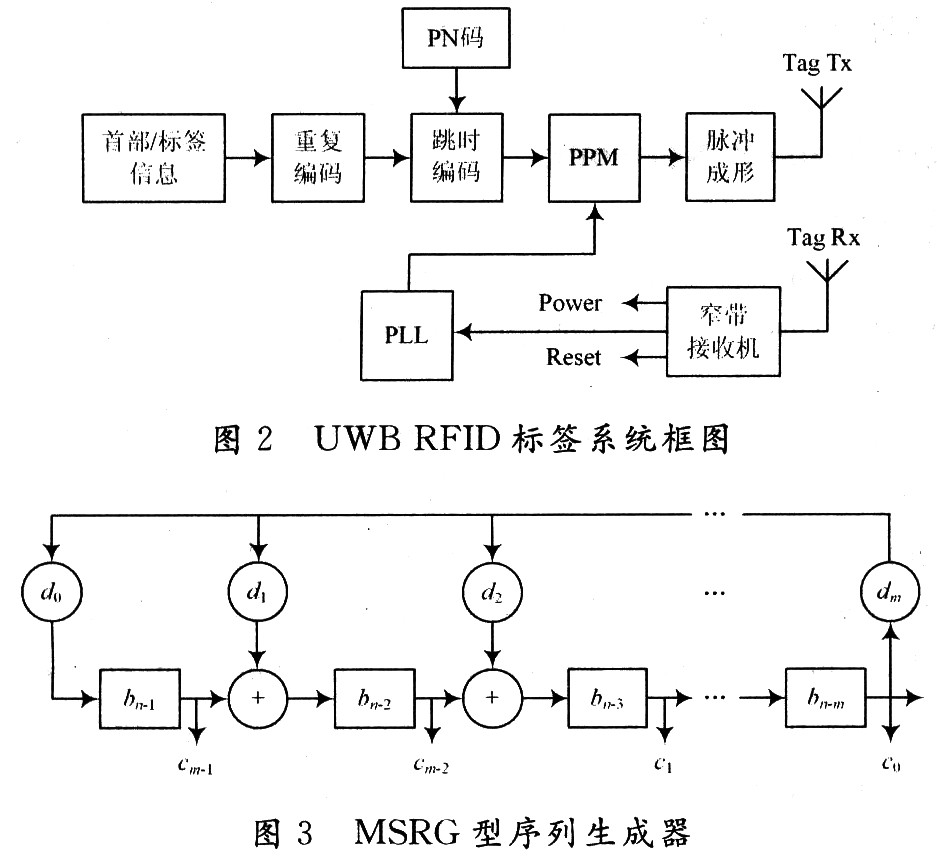 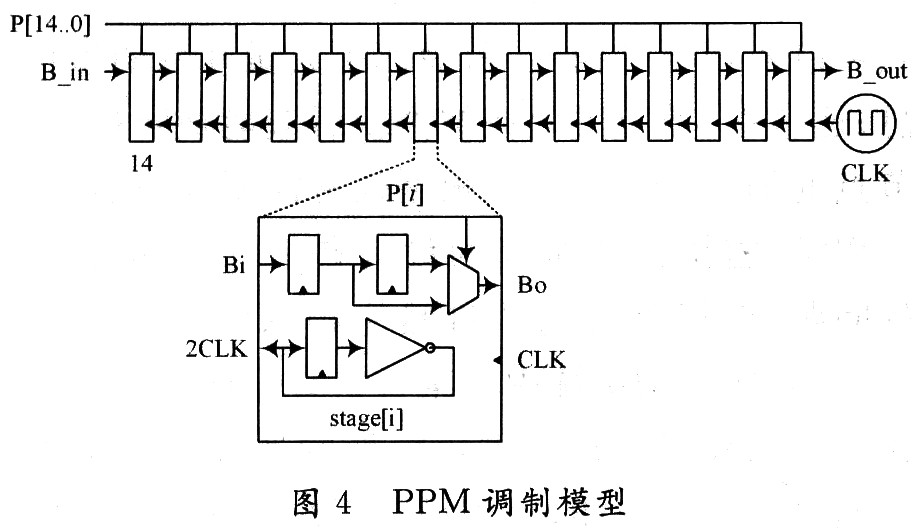 Frequency divider structure PPM modulator consists of frequency divider and trigger. Because the system chooses a 15-level pseudo-random sequence generator, there are a total of 15 modules in the figure, and each module will divide the previous module by two, and then provide the clock for the trigger of the module. Each module is driven by the clock. If P [i] is '0', the output is delayed by one clock cycle; if P [i] is '1', the output is delayed by two clock cycles. 15 modules have a minimum delay of 215-1 cycles (when P [14..0] = 00 ... 00), so the data can only be modulated on 215-1 slots after 216.1 slots, eliminating Intersymbol crosstalk between two adjacent bit spaces.

2 In the conclusion, a variety of RFID security authentication based on algorithms and protocols are compared, but this security authentication method will complicate the circuit of the label, which is not conducive to integration and cost reduction, and the label information is easy to leak, so this paper proposes a UWB-based RFID security authentication system, and did some research and simulation of some important modules. Due to the limited space and ability, there are still many problems to be discussed and studied in such a system. For example, the MAC protocol between the reader and the tag based on the UWB RFID system needs more in-depth discussion.

ZTE had tested our 200G CFP2 optical transceiver samples and approved it in Apr. ,2018 . We can offer products from July ,2018 .Welcome to send inquiry to us .