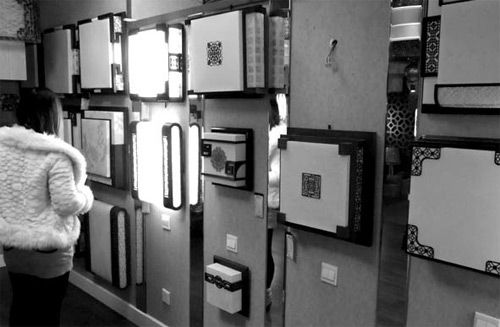 During the Lunar New Year, people began to clean and arrange their houses. Lamps, which are an important part of home decoration, also ushered in the hot period of the new year.

In the Beijing Shilihe Lighting & Lighting Mall, hundreds of lighting shops are arranged in an orderly manner. Visitors to the shopping malls are constantly entering and exiting to form a spectacular cross-flowing crowd.

In Knock Lighting Appliance Store, nearly 100 kinds of lamps of different sizes and styles are eye-catching. Floor lamps, table lamps, wall lamps, ceiling lamps, and ceiling lamps should have their own eyes.

What drew the attention of reporters was that most of these lamps were mainly copper art, iron art and resin materials, and the metal patterns carved on the lamp frame were very delicate and colorful. However, the luminosity of the luminaire seems to be bleak and dim. The light of the lamp is also accompanied by old velvety yellow, which looks like it has an old sense that has not been wiped for years.

According to Liu Jinwei, the store manager, these are all classical European lamps and are very popular among young consumers and middle-aged and high-end business people who have a certain understanding of Western culture.

â€œThese people are obsessed with Western style of life, but also like the traditional design style of Western style changes.â€ Liu Jinwei said that in order to highlight its classical charm, generally use rust, black paint, etc. to create distressed mottled effect, to create a consumer Old gray old feeling. In the material of lamps and lanterns, it is generally based on the use of copper, iron and other relatively stable and heavy metal texture and gold and silver foil on the strong sense of the main resin.

Liu Jinwei said that because of its good color, good texture, and strong anti-oxidation capability, European style lamps on the market are still made of copper, and on the color, there are old copper, bronze and copper. The primary yellow and artificial black four. "These are classic colors and are also more conducive to creating a sense of history."

"You see the European candle holder chandeliers, do not look at the simple "shadow" lamp shades are not even, and the above "rust" markings are also very clear, from afar looks like it was just washed out and was simply washed and processed The same thing as the cultural relics." Liu Jinwei said that it was such an ancient fire that was selling fire.

European-style lamps and lanterns are generally due to the use of materials and process reasons, mainly in the high-end market, the price is generally between 2,000 to tens of thousands of yuan. â€œBut the market recognition is very high, and consumers are also very forceful. Our average monthly sales are at least one million yuan,â€ said Liu Jinwei.

Comparing with the European lamps that pay attention to artificial historical oblivion to show heavy temperament, there are also many consumers who prefer Chinese-style lamps with Chinese traditional culture that are more understandable and more cost-effective.

In the Oriental Royal Lighting Store, in the 78-square-meter exhibition hall, Chinese classical lamps with different shapes, sizes, and patterns are erected, or hung, or hung. There is a pure imitation of ancient lanterns, and they also incorporate modern design elements. The aesthetic concept of the new Chinese lamps.

With the help of rich treasures of traditional Chinese culture, classical Chinese lamps and lanterns are not only plentiful in shape, but also innovative and unique. In the material, mainly hollowed out, carved wood, or painted with a variety of classical imitation ceramic patterns, people feel dignified and elegant yet full of peace and simplicity.

In terms of creative content, Chinese-style lamps and lanterns are from the traditional painting design themes of â€œMoonlight over the Lotus Pondâ€, â€œSpring and Autumn Moonâ€, â€œButterfly and Flowerâ€, â€œBreeze over the Moon,â€ â€œMeilan Bamboo and Chrysanthemum Four Gentlemen,â€ to the Chinese classical poetry couplets, Classical novels, then mythical characters, are all-encompassing. The richly-inspired pattern of lamps and lanterns, together with high-quality silk or imitation parchment, not only gives warm colors, but also gives people a sense of self-cultivation.

The store manager Chen Yanhua said that the market price of Chinese-style lamps and lanterns is not too high, generally between 200 yuan and 800 yuan, compared to other European and American high-end lamps of the same size, the price is about 60% or even several times cheaper.

â€œI like traditional things. As the saying goes, I believe that the traditional Chinese art culture can be integrated into the design of our daily necessities. It is the need of the times and the blessing of our consumers.â€ Lighting, lanterns, consumers Mr. Liu is a native "old Beijing." He grew up in the courtyard of old Beijing. He remembers the red lanterns of various styles hanging in the courtyard every spring festival. He talks about the Chinese lamps. There is emotion.

â€œThe essence of traditional Chinese culture is to pay attention to the unity of nature and humanity. While the modern industrial civilization is growing, the protection of traditional culture should be in line with every detail of peopleâ€™s real life, making it a closely related part of peopleâ€™s everyday lives.â€ Mr. Liu Said that the lamps in their own homes range from toilets to kitchens, and almost all of them are Chinese lamps.

However, the store manager Chen Yanhua also admitted that since people are now moving into concrete high-rise buildings, the traditional lamps derived from the architectural culture of ancient Chinese civil architecture make many people feel that for home decoration, it seems a bit nondescript, most of the current Still, it mainly sells costumes for film and television dramas, Chinese-style clubs and villas.

However, Chen Yanhua feels that this is not a big problem for the future development of Chinese-style (Chinese-style decoration renderings) lamps. On the one hand, Chinese-style furniture has always been innovative in combination with changes in the characteristics of the times and people's home forms, and new types of wall lamps, ceiling lamps and other new products have been developed based on traditional cultural elements. On the other hand, there are more and more â€œhybridsâ€ of Chinese and Western cross-border lamps that incorporate the diverse needs of consumers in the lighting market. Many lamps have played down the distinction of â€œnationalityâ€.

â€œFor example, the table-shaped desk lamp with a figure eight shape, the light stand is obviously based on the lattice stripes on the traditional Chinese doors and windows (doors and windows decoration renderings), the base is a blue and white porcelain painted with Chinese traditional ink painting, but its lampshades are from Spain. (Spanish decoration renderings) imported alabaster, and the style of western iron sculpture on the lighthouse is also very obvious."

Chen Yanhua said that with the revival of traditional culture, the market demand for Chinese-style lamps and lanterns will increase, but the culture will always flow. This does not mean that Chinese-style and European-style lamps and lanterns will compete in the same way as two parallel lines, but It will enable them to conduct more Chinese and European fusions in culture and craftsmanship according to the needs of consumers.

The shipboard medium voltage power cables are intended for shipboard and off-shore building to transmit power.