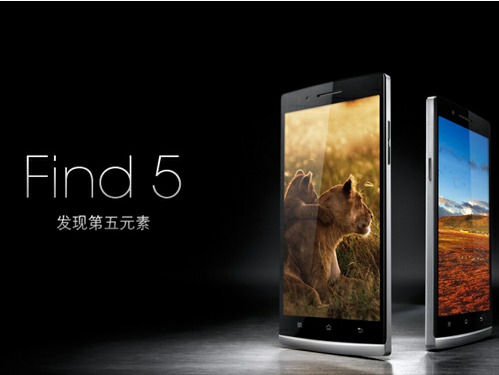 As early as November 20, OPPO deputy general manager Liu Zuohu published a message on Sina Weibo. The OPPO will be launched on the 12th of December in Beijing, and Find 5 will be launched. This year's highly popular smartphones will continue to flow. water surface.

On December 5th, a screenshot of a US website also fully demonstrated OPPO Find 5's more detailed parameter configuration. OPPO Find 5 will be equipped with a 5-inch screen with a resolution of up to 1920Ã—1080 pixels, with a ppi of 441. Core hardware, find 5 is equipped with a Qualcomm APQ8064 quad-core 1.5GHz processor, 2GB RAM and 16GB ROM, while supporting WCDMA / GSM network, running Android 4.1.2 system, the Battery capacity is 2500 mAh, the battery is built-in, can not Disassemble. At the same time, OPPO Find 5 is priced at US$499, equivalent to RMB3,107.

At 14:30, the conference officially began, and Liu Zuhu, deputy general manager of OPPO, also made a guest appearance at this event.

Among the highlights of the OPPO Find 5 are the five-inch super-screens that have previously been exposed to 1080p, and the 441PPI has the highest resolution in history.

In addition, this ultra-polar screen also uses OGS bonding technology, it will touch screen into the protective glass, and the protective glass directly on the display. As a result, the thickness of the screen is reduced by 20% and the light transmission rate is increased by 10%.

OPPO Find 5's front-to-bottom shape is seamless, and the aesthetic concept of the screen is impressive. At the time of the information screen, it was dark and full of mystery. This is the result of the perfect combination of an ultra-narrow frame, a metal front shell, a 3-wire high-light tape, and a full-fit technology. At the same time, OPPO Find 5 also uses ultra-narrow frame processing, 3.25mm is the narrowest frame of the current large-screen mobile phone.

On the camera side, the OPPO Find 5 has the most advanced 13 million-pixel stacked CMOS sensor with a sensing device size of 1/3.06 inches. The lens also has a f/2.2 large aperture and a blue glass filter.

It is learned that OPPO Find 5 is the world's first smartphone supporting hardware HDR, and also supports HDR recording. At the same time, it is also the world's first mobile phone that supports high-speed video at 120 frames per second, which is equivalent to 5 times the speed of human perception. The Find 5 high-speed continuous shooting function can take more than 100 photos continuously at a rate of 5 frames per second.

In terms of music, OPPO Find 5, in addition to using Dolby 3.0 surround technology, has also introduced Dirac HD technology selected by a few high-end foreign brands such as BMW, Bentley, and Rolls-Royce. Dirac HD is a combination of hardware and software acoustic solutions, it is usually only used in high-end audio equipment, theaters and on-board systems.

In terms of software and experience, OPPO Find 5 also has outstanding performance. The scene introduces NFC flash, microblogging, and context tags on the NFC function. At the same time, there are OPPO Find 5 car mode and real navigation features. And WiFi-display function, no connection cable, mobile phone screen can be synchronized on the TV in high-definition.

The final announced price of 3,500 yuan in the previous rumors did not break through, pricing at 2998 yuan let us feel the sincerity of OPPO to users.