IT168 News On November 10th, Xiaomi TV announced that it will launch a system upgrade of the popular PatchWall puzzle wall artificial intelligence system at 3pm to promote millet box 3 and millet box 3 enhanced version. Users who own these two box products only need to perform system update operation in the â€œSettingsâ€ option, and they can experience a brand new experience like â€œReading content better and knowing you betterâ€. 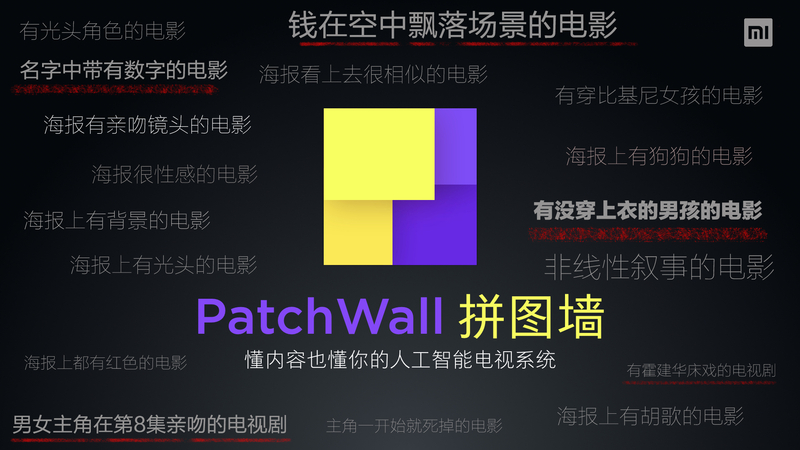 The debut of the PatchWall puzzle wall artificial intelligence system launched by Xiaomi TV on September 27 attracted users of the millet box. They demanded a high level of system upgrade. In response, Xiaomi TV officially launched the first round of upgrades. The system provides channels for selection, drama, film, variety show, children, VIP, documentary, classification, application, shopping mall, etc. Compared with traditional integrated modules, the display mode is clear at a glance. The contents of each channel are arranged in exquisite magazine layouts and can be displayed in unlimited waterfalls.

Importantly, the â€œPatchWall Puzzle Wallâ€ artificial system also applies the â€œMi Brainâ€ team technology, seamlessly accesses the deep learning and artificial intelligence system built by Xiaomi TV, and can make video content very interesting. Classifications, such as â€œmovies with a bald characterâ€ and â€œmovies with falling scenes of money from the air,â€ and at the same time, they can also arrange a lot of unexpected movie and TV topics from time to time, and continue to learn the habits of users and their families, and increasingly understand users. .

"PatchWall puzzle wall" can be different from people's exact recommendation, its magazine typesetting, unlimited scrolling of the contents of the waterfall stream, reducing the open source path, such as with Bluetooth or voice remote interaction, but also significantly shorten the time to find the film, The user clicks and looks.

It is reported that millet box 3, millet box 3 enhanced version of the two products released at the end of last year and earlier this year. Since its launch, it has attracted a large number of consumers by virtue of its stylish, lightweight appearance, powerful hardware performance, and massive content resources. And at 3 pm on November 10th, Xiaomi will officially push system updates to these two millet boxes, and would like to experience the friends of the artificial intelligence system for the first time, and quickly open the enhanced version of the millet box 3 and the millet box 3 to update it.