In a series of discussions on light-emitting diodes (LEDs), we discussed the short-term challenges of the LED industry â€“ try to avoid discussions such as cost or focus on replacing such topics, focusing on the equally important LED industry development factors.

My latest blog post explores the consequences of driving LEDs with an existing DC component and AC (AC). This article wants to talk a little bit about one of the most notorious reasons for the LED industry: Flicker ). In recent days, flashing is a hot topic, and it is also a battlefield for LED manufacturers to "get together." 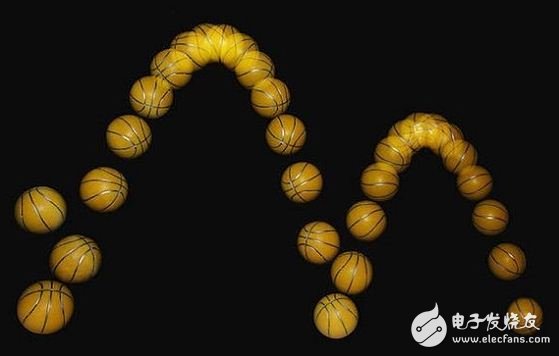 An image of a bouncing ball captured by a flash strobe at 25 frames per second. (Michael Maggs Photography, Richard Bartz)

However, Indirect Flicker can be found at higher frequencies, and its various manifestations. The most common, called Stroboscopic Flicker, is a jagged visual perception of a moving object or a rapid eye movement. Flashing flashing is some common user experience of LED users, and watching the context, the flashing flashing is almost inconspicuous, but it is unacceptable - lucky eyes can also follow the basketball in the wrong light .

Studies have shown that flashing flicker can be triggered at frequencies above 1,000 Hz, far beyond the threshold of human consciousness. In addition, indirect flashing can also cause physiological effects, similar to lower "employee performance", which can cause headaches or epilepsy when sensitized and flashed to severe levels. Just as someone is in a daily run, crossing a sidewalk stripe, migraine because of flashing, I tend to be quite sympathetic...

Unfortunately, this complexity has only a few indicators that can be used to indicate various problems with flicker. The two most common "flicker percentages" and "flicker indicators", while simple but have drawbacks: for example, these two indicators ignore the important perceived frequencies of direct flicker, so currently the various research units include the International Commission on Illumination (CIE). The Lighting Society (IES), the Institute of Electrical and Electronics Engineers (IEEE)... have put forward more advanced indicators. However, today, in the absence of a recognized metric, the best way is through experimentation: a simple visual test with a Flicker Wheel or a swinging finger often provides a clear answer. For example, the California Energy Commission's Voluntary Quality Spec mentions that the scintillation test should be performed by an auditor who is very sensitive to flicker.

LED flashing occurs in part because the LED follows a fast response time fed by a wave, and the LED driver attempts to correct the AC waveform to make it as smooth as possible, but this is a complex taskâ€”especially when the dimmer ( Dimmer) When entering the program, the drive must be compatible with waveforms input by different dimmers, which will cause the problem of LED flashing to be more pronounced in dimly lit environments.

Therefore, how to reduce the phenomenon of LED flicker when actually designing LEDs? Of course, the simple way is to get rid of the AC current and use a constant-current device, but this is not the only option.

The most basic answer in retrofit applications is a driver that is better designed and can always be implemented with the correct capacitors. The difficulty is the balance between flicker and other key issues such as cost, size and heat. Capacitors with better energy storage capacity tend to be expensive, take up space and have low heat tolerance - when the driver in a small retrofit lamp holder is filled with capacitors, it sounds a little bad!

Therefore, manufacturing is facing a difficult problem. A-bulb should be flash-free when it is sold in a home improvement store, or should it be reduced by another $1 to reach the consumer price threshold? Should Soraa's MR16 be given a very high Candela or a built-in low-flash drive that reduces power consumption and heat?

Fortunately, with the advancement of technology, the impact of the above trade-offs has become smaller and smaller. Taking the bulb produced by Soraa as an example, the basic technology of LED is continuously improved, so that the new generation of lamps can emit brighter light as much as possible, and also has lower input power and less heat. Soraa said: "We are pursuing simple products, which is why we launched a true flicker-free solution this month - the Lightfair series, and the new MR16 bulb will be launched later this year, benefiting from its superior drive, Therefore, no matter what dimming conditions, the new bulb oscillates less than the halogen lamp."

Looking into the future, we can only hope that such a program will gradually become the mainstream, so that we will no longer have to worry about the problem of flickering, and it can be done once and for all.

Â· Please feel free to contact us for any questions at any time.