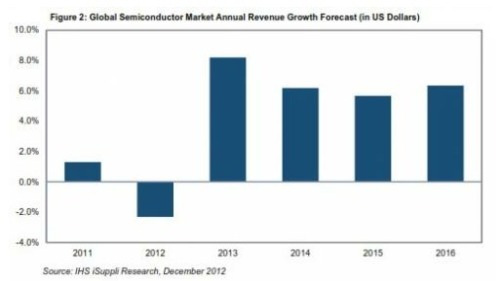 According to IHS iSuppli's semiconductor manufacturing and supply market tracking report, the global economic downturn will bring pressure, which will lead to the annual global semiconductor operating revenue contraction, taking back the increase recorded by the industry last year.

The global economy is still the most critical factor affecting the semiconductor industry this year and next year, especially because the chip industry is highly dependent on consumer spending. Consumer spending may remain weak until consumers believe their financial situation is stable or improving.

The reduction in semiconductor inventory in 2012 was a serious problem. The complete reversal from expected growth to expected decline indicates that the semiconductor industry has become very bad and the downward pressure on sales has not eased. Although the final data has not yet been released, there is widespread concern in the industry that if the economic situation does not improve, the overall semiconductor industry's operating revenue may decline by 3-5% this year.

Worryingly, the industry has been unable to reduce inventory in the hands of channel and chip suppliers. Due to excess inventory, the final equipment manufacturer postponed ordering more components. As a result, the chip supplier's operating rate cannot be kept at an optimal level, and products can only be produced based on historical demand. In some cases, the expected demand did not appear, which further aggravated the inventory problem.

As the end of the year approaches, the market finds itself in a dilemma and cannot see the major factors that could boost semiconductor demand in the near future. Electronic system manufacturers have completed orders for the holiday sales season. Although the reordering of components by the end of November will provide another opportunity for semiconductor demand growth, market demand will be small by that time.

However, there is an important factor that has the potential to drive a rapid pick-up in chip demand, especially in the data processing industry of the semiconductor industry. The recently launched Windows 8 may attract consumers to purchase new PCs, especially Ultrabooks and other similar ultra-thin PCs. IHS iSuppli believes that to make this prospect a reality, retailers must drastically reduce prices so that the new PC can compete with the next-generation media tablet that currently dominates the consumer electronics market.

Overall, chip shipments in the third quarter are believed to have increased only 0.5% from the second quarter. In the fourth quarter of this year, shipments will perform even worse, and are expected to shrink by 12% from the previous quarter.

The outlook for the next year is improving. It is currently expected that chip shipments will increase by 11% in the first quarter of next year. At that time, manufacturers will achieve a balance between inventory and demand. However, there are still more than three months before the end of the first quarter of next year. Unexpected events may still occur during this period, further destroying this fragile growth prospect.

Mist Sprayer Drone carries a light smlog machine and use for the trees with dense leaves.